The Royal Society for Public Health claims that adding ‘activity equivalent’ icons – pictures showing how many minutes of physical activity it would take to burn off the calories in a food or beverage – could be an effective way to help people make smart dietary choices.

We all know this won’t work, right?

You can read through their position paper at this link; it details some staggering (yet absolutely true) statistics about obesity in the UK, such as the fact that over two-thirds of adults in the UK are overweight or obese.

But the idea that putting icons on the front of packages of chips, soda and chocolate will spur people to make healthy choices is a bad one at the very least. At worst, it might actually increase people’s desire to eat more of the things they shouldn’t.

Here’s why this idea should never see the light of day:

1. The icons are devoid of any real nutritional information.

Generally, people who maintain an active lifestyle are already quite aware that chocolate, chips and soda are full of fat and sugar, and therefore high in calories without any corresponding nutritional benefit.

But the icons don’t communicate this – there’s no way to make a comparison between, say, a can of soda and a chicken breast. They have roughly the same amount of calories, but the can of soda has pretty near zero nutritional value.

This is why the Nutritional Information section on the back of a product fails most people. But in this case, you’re trading one bad measurement for another. People who aren’t physically active and buy a chocolate bar usually have no idea what 13 minutes of running is like. And how fast? 5 miles an hour? 8 miles an hour?

I see newbies all the time approach a treadmill, set it to 5.5 mph, and gasp for breath after about 5 minutes of running, at which point they have to stop. Running is harder than most people think.

My best 5K time is just under 5 minutes, for which I burned approximately 500 calories. But to communicate to people exactly how hard it is to run at a (roughly) constant rate for 30 minutes is extremely difficult – and impossible to do through a picture.

3. Humans are incredibly good at rationalizing their choices – and incredibly bad at following through on their promises.

By including pictures of physical activity on products, you’re more likely to convince people to buy it and eat it, since they can more easily rationalize their choice. “All I have to do is walk for 13 minutes to justify this chocolate bar? All right!”

But the choice to actually do the physical activity has not yet been made – and probably won’t be. If you were forced to walk for the 13 minutes before you consume the food or beverage, you would likely make a very different choice.

Humans are notorious for making false promises to themselves. How many people have told themselves that they will TOTALLY start that diet…on Monday?

4. Associating physical activity with junk food further justifies the fact that these are valid food choices.

Putting displays of physical activity on junk food will set up the reverse association that people who are physically active intentionally consume these items, when the truth is that nutritionally educated and active people generally avoid these items.

5. Comparing junk food to other junk food is meaningless.

By restricting these labels to junk food products, you’re creating an artificial environment where you can only compare the relative values of junk food against other junk food – not against healthy food.

When a consumer buys a 250g chocolate bar instead of a 30-oz Belly Buster bottle of soda, they think they’ve made a healthier choice WHEN IN FACT BOTH PRODUCTS WERE POOR CHOICES TO BEGIN WITH.

6. The calorie is a terrible measurement of value.

By reducing comparisons strictly to a meaningless number, you force people into bad choices. Take the infographic below: 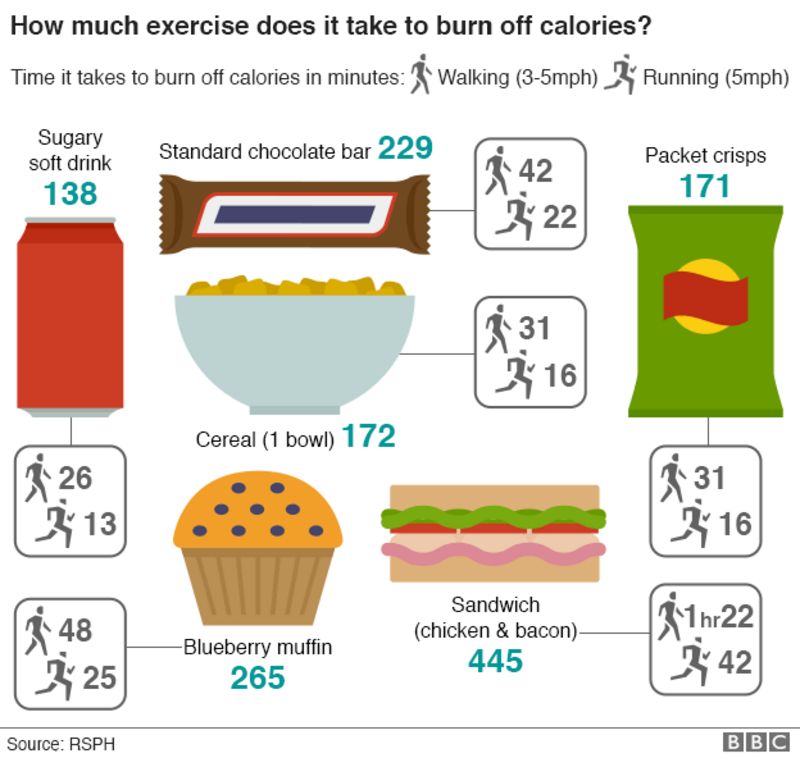 But this misses the point that the sandwich contains soluble and insoluble fiber, complex carbohydrates, protein and a host of essential vitamins and minerals. Plus it will satisfy your hunger for a lot longer and cause you to eat less in the long run.

7. It reflects physical activity as a punishment for eating – not as a valid lifestyle choice for improved health.

With so many people neglecting physical activity in their life, why do we need to insinuate that “if I don’t drink that can of Coke then I don’t have to exercise?”

“I just ate a packet of chips and a soda, let me see – aw, hell, that’s an entire HOUR I have to exercise. No way can I do that. I’ll just sit here and get fat, thank you very much.” If I added up all the calories in my day while eating clean, I’d have to run for THREE HOURS AND FORTY MINUTES??! WHAT THE HELL?!?!

But the fact is that body metabolism doesn’t work that way – my basic metabolism just to stay alive takes care of a chunk of that, and the extra movement all day takes care of most of the rest of that.

Do we need to do something to improve nutritional health in this world? Totally. Will little pictures on junk food products do it? Absolutely not. Let’s solve the problems we have with food deserts, nutritional poverty, supporting junk food manufacturers and feeding junk to our children in schools first. Then we can worry about how to stop grown adults from deluding themselves that a chocolate bar can be a healthy choice.

Enter your email below to get FREE copies of my two most popular books - The Wellness Rebel Manifesto and 5K in 8 Weeks - as a thanks for stopping by. 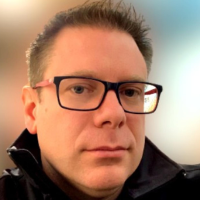